With major earthquakes occurring in Japan, New Zealand and many other countries around the world recently, I did some online research to check if Melbourne is safe from these natural calamities. Places such as Japan, New Zealand, Indonesia, California, British Columbia and Chile are located on the Pacific Rim of Fire, close to the boundaries of tectonic plates which make up the Earth’s crust. Large numbers of earthquakes and volcanic eruptions occur in these areas due to the pushing and sliding of tectonic plates against each other.

Despite sitting in the middle of a tectonic plate (the Australian plate), Australia is subjected to the stresses and strains from movements at the plate boundaries. It has a relatively high risk of seismic activities compared to other intraplate regions such as India, South Africa, central Africa, central USA and Canada. Two earthquakes of magnitude 4.6 on the Richter scale struck the Gippsland town of Korumburra in southeast Victoria in 2009 and were felt 120 km away in Melbourne. Scientists warned that larger earthquakes could strike more populated areas in the future and Australian buildings are not designed to withstand a major earthquake. (Ref 1, 2)

I recall reading that the Blue Lake of Mount Gambier in South Australia was formed from the crater of an erupted volcano. I was surprised to find out that numerous volcanoes exist in Victoria and one of them, the Red Rock Reserve is actually only within 1.5 hour drive from Melbourne or 17 km, 10 min drive from Colac. It is located in the township of Alvie on the eastern edge of the Kanawinka Global Geopark.

From Colac, drive west on A1 for 5 km, turn right at the Red Rock sign into Corangamite Lake Road and pass through the settlements of Cororooke and Coragulac. In Coragulac, St Brendan’s Catholic Church and the adjoining primary school are landmarks on the left.

The Alvie township was the heart of a rich potato and onion growing district until the latter half of last century. Note the vineyard and winery/restaurant just before the ascent to Red Rock. The historic St Andrews Anglican Church, built in 1895 and featuring English stained glass windows, nestles at the foot of the rise.

The sweeping plains and spectacular mountains in the Kanawinka Global Geopark are largely the result of volcanic activity. Between 4.5 and 2 million years ago, lava from nearly 400 individual volcanic eruption points flowed over an area known as the Newer Volcanics Province which covers 23,000 square km, extending to the north of Ballarat and reappearing in a small section of south-eastern South Australia. The flowing lava spread evenly across existing plains, followed valleys, flowed under water and in some cases forced upwards into rough, stony hills called tumuli or steeper scoria cones. Many of the eruptions were witnessed by indigenous people who have inhabited this region for up to 45,000 years. The volcanic stones were used both by the aboriginal people and later by European settlers in the 1870-80s for construction purposes.

Red Rock features a cluster of over 40 eruption points concentrated in a 4 km by 3 km area just south of Alvie and several smaller eruption points just north of the town. The massive eruptions, which created the well-preserved formations of maars, tuff rings and scoria cones at Red Rock, is believed to have taken place between 6,000 and 12,000 years ago. The presence of iron gives Red Rock its distinctive colour.

The eruption history of Red Rock comprises 2 main phases. The first phase involves explosive interactions between magma (molten rock) and groundwater that formed wide craters called maars. During eruptions, fine-grained volcanic ash was blasted from multiple vents (openings) within the maar to form its rim (called the tuff ring). In the second phase, there was an initial short period of fire-fountaining, when the magma was ejected from the vent as a fluid lava fountain. Then gases within the magma expanded, fragmenting the magma and producing violent eruptions of scoria (volcanic rocks with vesicles) onto the surface, creating hills called scoria cones which occur throughout the Red Rock Reserve and overlay the maars from earlier eruptions. Before white settlement, the scoria cones were covered in predominantly Casuarina open woodland.

There are 9 complete craters up to 75 metres deep, some which were filled with water, forming lakes such as Lake Purdiguluc, Lake Werowrap, Lake Gnalingurk and Lake Coragulac. Lake Purdiguluc has been formed by at least 5 coalescing eruption points. The Red Rock lakes have been dry since 1999, which may be a cyclic event or due to over-extraction of groundwater. The critically endangered Corangamite Water Skink can be found around the lakes.

The volcanoes at Red Rock form a contrasting landscape to the otherwise flat countryside formed by earlier lava flows, which gave the western district its rich fertile soils of immense agricultural value.

Similar explosive vulcanism occurred in many other areas of western Victoria and eastern South Australia, with the last eruption occurring 4,500 years ago at Mt. Gambier. Other maars produced during this time include Lake Purrumbete southeast of Camperdown, the lake at Tower Hill near Warrnambool and the Blue Lakes at Mt Gambier. Scoria cones include Mt Shadwell at Mortlake, Mt Leura at Camperdown and Mt Elephant at Derrinallum.

Coming from Corangamite Lake Road, you will arrive at Alvie. Just after passing Red Rock Winery/Restaurant on the left, turn left into Coragulac Hill Road. Just prior to the ascent to the Red Rock Lookouts is the Alvie Picnic Area on the left, which has toilets, a playground, free gas barbecues, shady trees and a shelter with a fireplace, picnic tables and benches. Adjacent is the Old Shire Pit – a scoria quarry which reveals layers of ash and lava flow.

The now dried-up Lake Coragulac viewed from Alvie Picnic Area. It covers an area of about 34 hectares when full.

After ascending the hill a short distance, you will come to an intersection, where the left branch road will take you to the Eastern Lookout (Memorial Dial) and the right branch road leads to the Western Lookout. 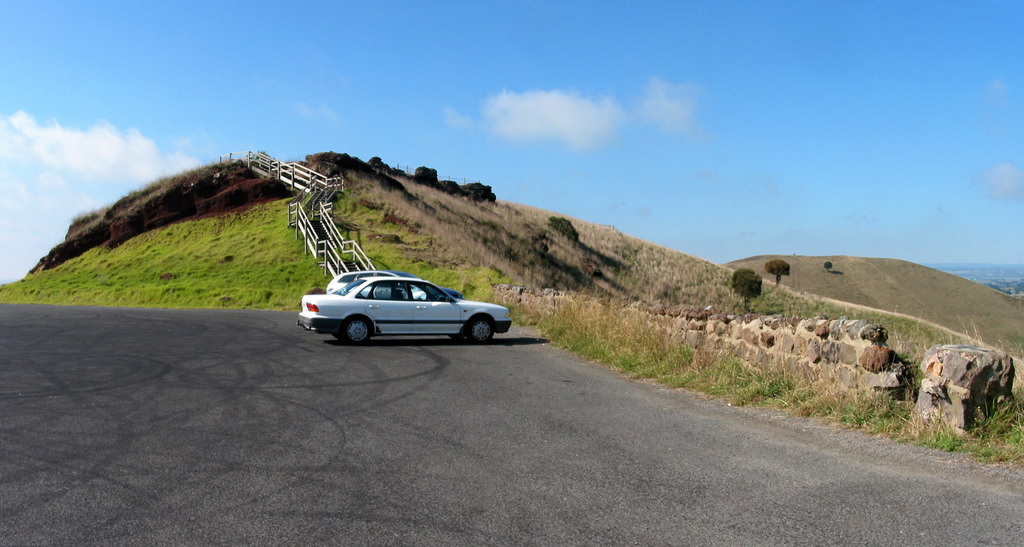 There is a viewing platform and a stairway to the top of a hill.

To the south of the Western Lookout (see embedded map below) are Lake Gnalingurk, Lake Purdigulac and Lake Werowrap, which were formed from volcanic craters and are now devoid of water.

Click each placemark/icon to view the info & photo. Go to map to see more details.

To the northwest, the volcanic peaks of Mt Porndon, Mt Sugarloaf and Mt Elephant are visible. To the west is Lake Corangamite, the largest permanent salt water lake in Australia with a surface area of 234 square km, a circumference of 150 km and a north-south span of 32 km. Corangamite means “bitter” or “salt water” in aboriginal language – a reference to its extreme salinity (3 times saltier than seawater). The streams that feed the lake do not provide substantial amount of water and being a rather shallow basin, the water merely evaporates, causing an accumulation of salinity. Tongues of lava extend out into the lake. These rocky outcrops and beaches of tiny Coxiella shells form the shoreline. The lake is home to around 75 bird species and one of the few breeding grounds for pelicans. 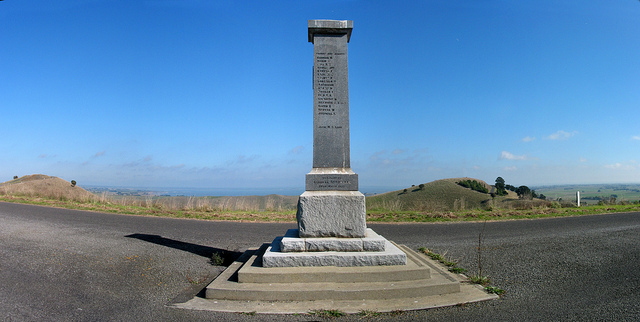 Along the way to the Eastern Lookout is a War Memorial in the middle of the road, unveiled by General Birdwood on 24th March 1920. What a surprise as I happen to make use of the ANZAC Day 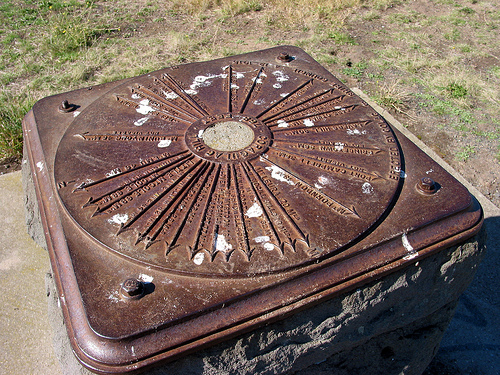 public holiday to visit Red Rock! There is a Memorial Dial at the Lookout, which gives the direction of various places such as Port Campbell from this location.

I was intrigued by an unusual landscape. Towering in front of me was the barren face of a “hill”. You would expect a typical hill to be tapering towards the top. However, this face/slope was so extraordinarily rectangular and wide. A few trees dotted the top, breaking the otherwise spartan character of this huge canvas. I wonder whether these trees sprouted by themselves or were planted by humans and if they were planted, what purpose would they serve, other than to pique the curiosity of the observers. I suspect this is actually a gigantic crater and the road was built running along part of its rim.

To the northeast of the Eastern Lookout are Beeac township and Lake Beeac. The milky white appearance of Lake Beeac is due to hyper salinity. Red-necked Avocets and Banded Stilts feed on the large numbers of brine shrimps in the lake. To the southeast are Colac city and Lake Colac, which is the largest freshwater lake in Victoria.

Directly below is situated the historic Coragulac House, a 26-room bluestone mansion built in 1873 by George Pringle Robertson, the third son of the early landowner William Robertson. The two distinctive conical towers were added around the turn of the twentieth century by a later owner. The original estate of 7 hectares included formal gardens and lawns, a kitchen garden, fishponds, glass houses and a full-sized polo field. The property is in private ownership and not open to the public. 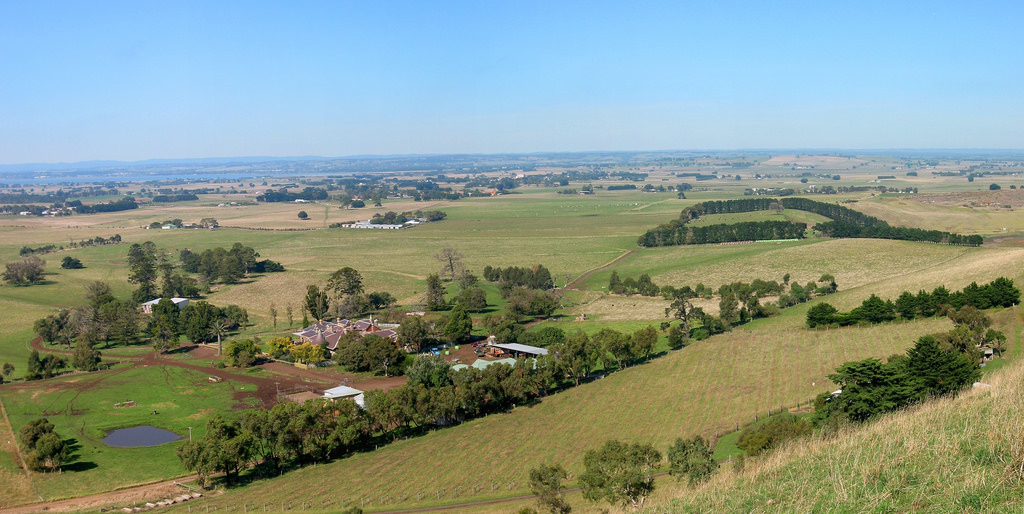 Otway Ranges are in the distance sweeping to the south.

Try rotating this Street View 360 degrees! Use the left/right button. This Street View may take a longer time to load. Click the “Restore” button if it fails to load. 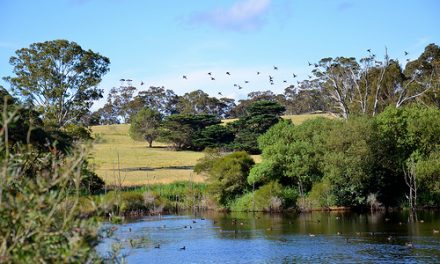 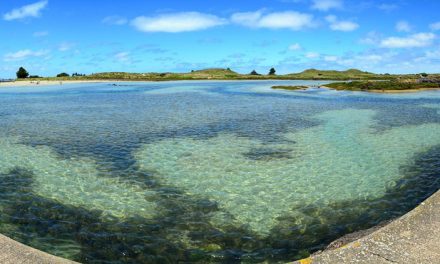 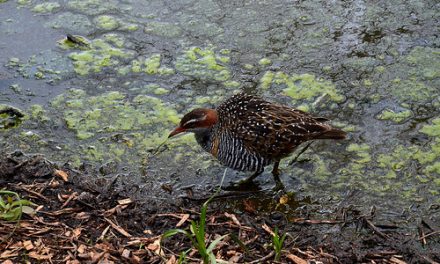 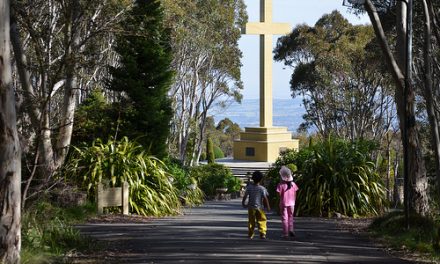