I was late to arrive at Westona train station last Friday 24th February 2012 at 8.26 a.m. and was surprised to see the carpark only half full. The carpark used to fill up by this time in the not-so-distant past, with late cars flowing into the roadsides and surrounding neighbourhoods. The following photo clearly shows the stark emptiness of the carpark. 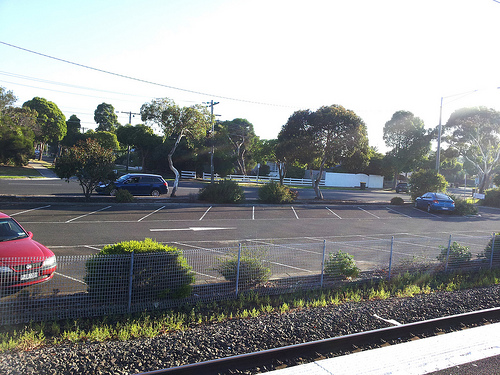 I have learnt from members of the Altona Loop Facebook Group that the same phenomenon is also occurring to the carparks at Altona and Seaholme, indicating that the cause is systemic in nature rather than restricted to isolated cases. I concur that this must be a consequence of the change in train timetable and operation to the Altona Loop introduced last May, for I could not think of other reasons that would lead to such drastic decline in patronage of the station carparks.

Discussions have been occurring that suggest people have driven their cars from Altona to park at Newport train station to catch trains to the City (Ref 1). This trend has been officially confirmed by a recent report released by Hobsons Bay City Council that stated more commuters were travelling by car to Newport station since last year’s changes to train services and timetables on the Altona loop (Ref 2).

The report also noted a new 200-space carpark would soon open on the east side of Market Street. You may have noticed this new carpark on the left side of the rail track before the train reaches Newport and the Substation travelling in the direction towards the City. The increase in parking space will make possible for even more cars to drive to Newport.

Is the reduced usage of Altona Loop carparks a healthy trend or something to be concerned about? Go figure yourself.